The second day of racing at the GBR Nationals brought much lighter conditions, 7-8 knots was the form. This also created wind holes in parts of the course, and together with wind shifts, created conditions more familiar to lake sailors. Often though, a sea breeze can develop in the afternoons here, but today it would added maybe a knot or two this time.

The race format was the same as day one; three races, two starts, one course. Only this time, the conditions were much more a Classic boat day. With the 3 lap Open and 2 lap Classic division format put the boot on the other foot with the Classics having to wait between the races for the foilers to finish for a change.

The shifts meant that on one lap one side was favoured, and maybe on the next it had moved to the other. This was very much a tactical experts day.

All the starts for off first time, possibly leading to the PRO having a misguided belief now that the ‘A’ Cats are the pussycats of all the fleets, as they are so well behaved at the line. Maybe he’ll be in for a rude awakening though at the Worlds this weekend as the bigger fleets fight for positions on the line. The decision to run both fleets at the same time, albeit on different starts, proved to be a very workable mode, presenting few problems, and the finishing times were comparable with the differing lap numbers

Racing inside Portland Harbour this time, partly to reduce jellyfish encounters and partly because the lower winds can require a shorter top mark distance. The jellyfish were still at the party though, however fewer in number and they were hit less hard if you did get one. They will hopefully be gone in a couple of days, and seem to sink down when it’s sunny.

In the Classics, the form of the previous day was still Scott Anderson AUS on the Exploder AD3 and Alberto Farnessi SWE on his old Marstrom battlecruiser, fighting for positions and with Bruno Biedermann SUI chasing in third. First blood of the day went to Scotty, but Alby showed great skill over the former World Champ by getting the final two bullets so he finished just 2 points behind in the end. GBR sailor Owen Cox was in his element on his newly acquired DNA. Owen is a lake sailor and sails at Bala Lake in Wales, so can handle shifts and the light stuff with ease, and became GBR National Champion as a result, and finished a very creditable 5thoverall.

In the Open division, the ‘early foilers’, so called because they can get on their foils in lighter winds earlier, were the winners here. This may well be a skill needed at time next week because so far, the forecast is at the lighter end of the window. Stevie Brewin AUS, sailing his spare Exploder Ad3 just managed to fend of a strong challenge from Mischa Heemskerk NED on the bright green DNA F1x, and an even stronger challenge from Bruce Mahoney USA on his British Racing Green F1x, we all assumed had been painted specially in honour of this event! The Junior GBR sailor Oscar Lindley-Smith was the top Brit in this strong field and thus becomes GBR Open National Champion.

So, now with the dress rehearsal over, all thoughts turn to the big one. A couple of days visiting Monkey World, Portland Bill and the Tank Museum or drinking local cider, then Saturday at 1pm for the practice race. Race one of the 2019 Worlds starts 11am Sunday, with two races in the Open division followed by two in the Classics at 1PM on the same course.

We all watch with anticipation as a few are yet to show their hands. 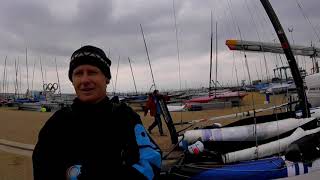 Looking to charter or lend a boat?